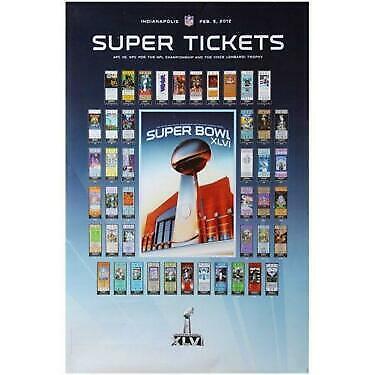 If youre a fan of the history of sports (particularly football), take a look at this piece of memorabilia. On eBay, you can find affordable tickets for past Super Bowl games or a seat to an upcoming event.

What can be seen on the ticket?

On the ticket, youll find the logos for both competing teams in the Super Bowl. Other key features include:

Youll find all of these features on this highly decorated tape along with artwork of the Lombardi Trophy, the trophy given to the winner of the Super Bowl. The NFL logo, as well as the Super Bowl logo, can also be found on the ticket. This includes a Roman numeral.

In addition to a seat to a big game, some tickets may have bonus amenities. These amenities can be redeemed if the tickets purchased are for an upcoming game. If the tickets are simply a piece of memorabilia, it can be a fun addition to this collectors item. Examples of extras that a ticket may have can include:

What teams have been involved in the Super Bowl?

In 2018, the New England Patriots played the Philadelphia Eagles. Over the years, many teams have been involved in the big game. You can find all of these historic tickets on eBay. The Patriots have competed in the game eight times in the last 17 years and have gone on to win five of them. They have competed against other opponents such as the Giants, the Seahawks, and the Panthers. Other tickets from other games can be purchased, including the famous Broncos-Panthers game from the 2015 season. Buy tickets from some of your favorite franchises that have gone on to win the big game over the years.

Content provided for informational purposes only. eBay is not affiliated with or endorsed by the NFL.