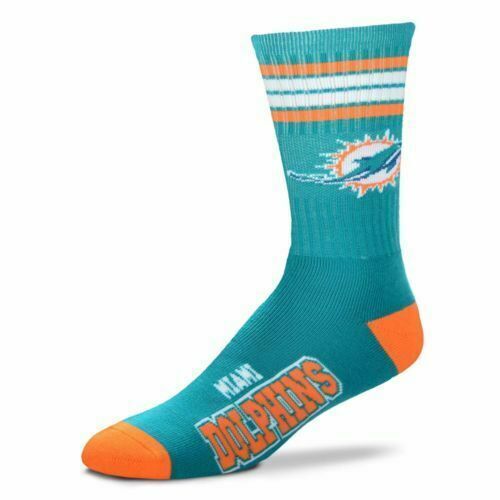 Since 1931, the Eagles have been the major football team of Philadelphia. The team colors of midnight green, black, white and silver can be viewed in socks for men that feature the Philadelphia Eagles name and logo. Mens socks with the NFL teams designs are available in many lengths and styles.

What color green is on Philadelphia Eagles NFL socks?

Midnight green, which is also sometimes referred to as Eagles green, has been the signature color for the Philadelphia team since 1996. It is distinguished by a particularly dark shade of cyan. In standard RGB color space, midnight green has no red and almost equal parts blue and green. Though almost all modern mens sock designs feature midnight green, you may occasionally find socks that are a bright kelly green instead. This is a throwback to the old color and logo that the team used back in the 1980s.

Which materials are used to make these NFL mens socks?

Mens socks made to celebrate the various NFL teams are created by several different companies, so they do not all have the same composition. All of the different fibers used in the stockings have unique benefits.

Which designs and patterns show up on Eagles socks?

How high are Philadelphia Eagles socks?

The length of the item you get will depend on which style you select.

Content provided for informational purposes only. eBay is not affiliated with or endorsed by the Philadelphia Eagles.