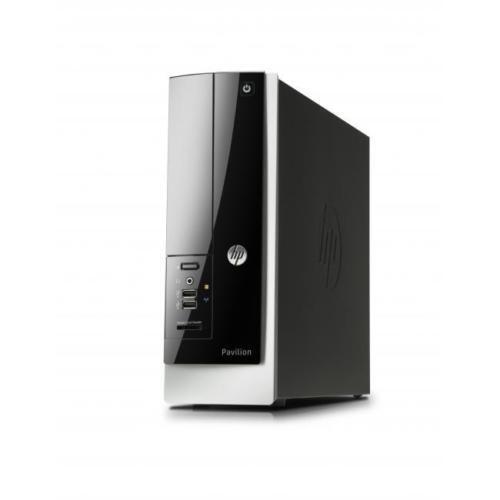 The HP Pavilion Slimline is a line of desktop computers produced by Hewlett-Packard. As the name implies, the Slimline features a small and slimmed-down design that wont take up a lot of room on your desk or in your computer area. Like many other Pavilion desktops, it is designed as an entry-level or mid-range PC.

What are the main features of the Pavilion Slimline?

The Slimline comes equipped with all the basic features of a consumer PC, including an Intel or AMD processor, a 7200-RPM hard drive, a rewritable DVD player, a memory card reader, Wi-Fi and/or Bluetooth compatibility, an Ethernet port, USB 2.0 and USB 3.0 ports, and sometimes an HDMI out. Some Slimline computers may also come with an optional USB mouse, keyboard, or monitor, and other ones will come with just a tower. The computer is housed in a small case with a minimalistic design and is primarily intended for basic tasks, such as web browsing, multimedia applications, and word processing. Most Slimline models come preloaded with software, including Google Chrome, HP Games, and various e-readers.

Which operating system does the Pavilion Slimline use?

Depending on the particular model you choose, the Pavilion Slimline runs on whatever version of Microsofts operating system was available at the time of its release, which means the 64-bit home version of Windows 7, 8, or 10. If you are running an older version of Microsofts operating system, then it is possible to update your PC to the newest version through a download. Windows 10 features fingerprint and face recognition login, Xbox Live integration, new security options, and a personal assistant system. Microsoft also replaced the Internet Explorer web browser with Microsoft Edge, which is built specifically for modern web standards. The operating system is updated with new features continuously throughout its life cycle.

Does the Pavilion Slimline have an integrated graphics card?

Most Slimline PCs are equipped with an integrated Intel or AMD video card. An integrated video card, as opposed to a dedicated card, is typically integrated directly into the motherboard of the computer. This allows the GPU, or graphics processing unit, to share some resources with the rest of the computer when it is not being actively used. This is a common practice in entry-level and some mid-range consumer PCs. An integrated GPU is more of an all-purpose processor rather than a dedicated video processor. It may still be capable of running some video games depending on the minimum requirements of the game in question. Some integrated video cards are able to run multiple monitors at the same time.

Content provided for informational purposes only. eBay is not affiliated with or endorsed by Hewlett-Packard.