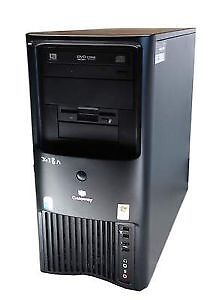 The essential components of a Windows desktop PC, without which it cannot run, are a motherboard, processor, power supply, RAM, and a storage device (SSD or HDD). In order to use it productively and get any satisfaction from it, you still need things like a graphics card, monitor, mouse, keyboard, and a network interface card. The advantage of a Gateway Intel Pentium 4 PC Desktop is the flexibility to customize, upgrade, or replace any or all of these components as desired.

What is the difference between SSD and HDD?

Solid state drives and hard disk drives are two types of computer storage solutions, each with its own features and benefits. A hard drive is a round metal plate that has been specially coated with a magnetic coating. This magnetic coating is where a computer stores data. Memory is expressed in terms of megabytes (MB) or gigabytes (GB).

What is non-volatile storage?

Non-volatile information, such as that stored on a hard disk drive, does not disappear when you turn off the computer. Contrast this with random-access memory, or RAM, which stores just what data is being used by the computer at any given moment.

What is a Gateway Intel Pentium 4 processor?

A central processing unit, or CPU, is a small chip that holds the logic circuitry that controls a computers software and hardware. The processing speed of a CPU is measured in gigahertz. The higher the GHz, the faster your Intel processor will operate.

What other Pentium 4 desktop components are available from Gateway?

Gateway makes servers as well as complete desktop units, such as the Profile 4 All-In-One 15-inch Intel 2.0 GHz 1GB RAM, the Gateway E-4300 Tower Intel 2.80GHz, and the 500S Intel, 2 GHz, 1 GB Desktop PC Tower. Even if you purchase one of these all-in-one units, you still have the capacity to tinker with the individual components to meet your particular computing needs.

Content provided for informational purposes only. eBay is not affiliated with or endorsed by Gateway.