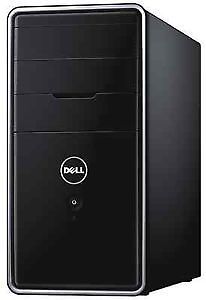 Finding the right personal computer (PC) can seem complex and torturous, but knowing what to look for can simplify the process. Whether you are looking for a system to run productivity programs, such as word processing and spreadsheet accounting, or for a students first computer, the Dell Desktop PC with Intels i5 4th generation core processor could fit the bill. This Dell Intel computer offers HDMI connectivity, plenty of GHz, and an array of available programs.

What operating system would you be working with?

What is the 4th generation i5 Intel Core processor?

What is computer memory?

Random Access Memory (RAM), also known as the memory cache, is short-term storage for information being processed. The bigger the cache, the more things the computer can be doing simultaneously, so you can read the news and check your email while listening to music. Think of the computer as a juggler. The RAM correlates to how many balls the juggler can keep in the air at the same time. The processor correlates to how fast he can juggle them. DDR3 RAM can provide a lot of memory for diverse needs.

What is a hard disk?

The hard disk drive (HDD), simply known as the hard drive, is the major storage component. It contains all of the information used by the system.