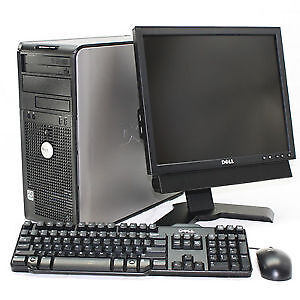 The CPU, or the central processing unit, is an integral part of the computers performance. It determines how much data can be processed at a single time. These particular Dell computers contain an AMD Athlon 64 X2 processor.

The Athlon 64 processor is the first series of AMD dual-core processors ever released by AMD. The dual-core design can handle multiple software "threads" at the same time, meaning it can process more work in parallel. This Athlon 64 processor works efficiently with software that is specifically designed to work with multiple threads. The CPU is also able to handle multiple programs at the same time. For example, you can run a virus protection utility while browsing the web or watching a video with minimal slowdown.All of the CPUs in this particular family are equipped with the following features:

What are the main types of Athlon 64 X2 processors?

The entire Athlon 64 X2 family can be broken down into five different groups: Manchester, Toledo, Windsor, Brisbane, and Kuma. Each group contains several individual processors with slightly different specifications or features. Manchester, Toledo, and Windsor have a 90-nanometer architecture. Brisbane and Kuma have a 65-nanometer architecture. 90-nanometer and 65-nanometer both measure the size of the individual transistors on the chip. A smaller process means that, in general, more transistors can fit together. It is important to note that Brisbane and Kuma were marketed under the Athlon X2 name. AMD dropped the 64 from the name once nearly all chips on the market became 64-bit.

What are the specifications of the Athlon 64 X2?

The precise specifications will vary based on the model. The maximum clock speed can range from 1.9 GHz at the lower end and 3.2 GHz towards the higher end. The processors also have either 512KB or 1024KB of L2 cache memory per core. L2 cache is a small pool of fast random-access memory embedded directly on the core. The most important and frequently used data is stored in the CPU cache, so it does not have to constantly access the main system RAM. This speeds up operations.

Quite a few Dell Dimension, Inspiron, and OptiPlex desktop computers produced between 2005 and 2010 feature an AMD Athlon 64 X2 CPU. The OptiPlex is aimed at the business, education, and government markets. The Dimension and Inspiron series are aimed at the consumer market. The Dimension series was discontinued in 2007 in favor of the Inspiron series. Many Dimension desktops were reintroduced under the Inspiron name. Examples include the Dell Dimension E521 transitioning into the Dell Inspiron 521.