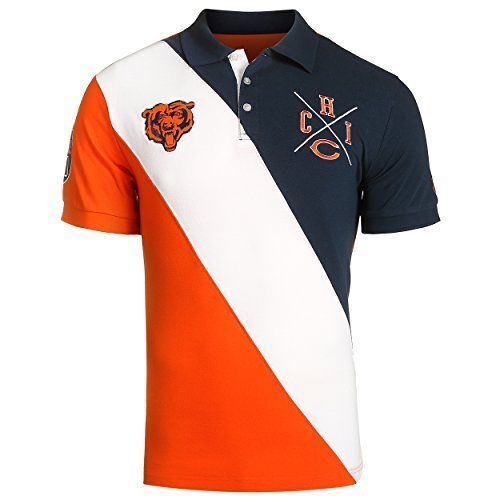 Who are the Chicago Bears?

The Chicago Bears are an American professional National Football League (NFL) team. The organization is based in Chicago, Illinois. In 1919, the Chicago Bears franchise was founded in Decatur, Illinois and then moved to Chicago in 1921. The Bears are a member of the National Football Conference (NFC) North division within the NFL. Their home stadium is Soldier Field, located along the shores of Lake Michigan in Chicago. The Bears have captured nine NFL championships and won the Super Bowl Championship game in 1985. With 739 total victories as of the start of the 2017 season, the franchise has one of the largest numbers of overall wins in the NFL. The Bears also have nicknames of "Da Bears" and "The Monsters of the Midway." The official mascot is Staley Da Bear, named after A. E. Staley, founder of the Bears franchise. The logo is a trademark orange "C" with a white border. The official colors are dark navy blue, orange, and white.

This is merchandise that has been branded with Chicago Bears logos and typical team colors. Apparel includes T-shirts, sweatshirts, hoodies, jackets, shorts, and polos. Shirts and other clothing are made in mens, womens, and childrens styles. Gear such as numbered jerseys of current and past legends, like Walter Payton, are part of the line.

What are Chicago Bears souvenirs?

Souvenirs are collectibles and memorabilia related to the Chicago Bears in general or specific team members, such as Walter Payton. Autographed gear and jerseys signed by players and coaches, bobbleheads, figurines, pins, photographs, coins, trading cards, plaques, prints, and artwork all constitute souvenirs. NFL and Chicago Bears fans and enthusiasts collect these to commemorate and celebrate players and games affiliated with the Chicago Bears. Souvenirs serve as keepsakes and mementos of the teams biggest moments in history.

Chicago Bears football fan game jerseys are replicas of game jerseys worn by Bears players. Jerseys are made in different styles and colors. These garments are available in mens, womens, and childrens sizes and styles. Classic jerseys feature names and numbers of past and present team members.

Content provided for informational purposes only. eBay is not affiliated with or endorsed by the Chicago Bears.